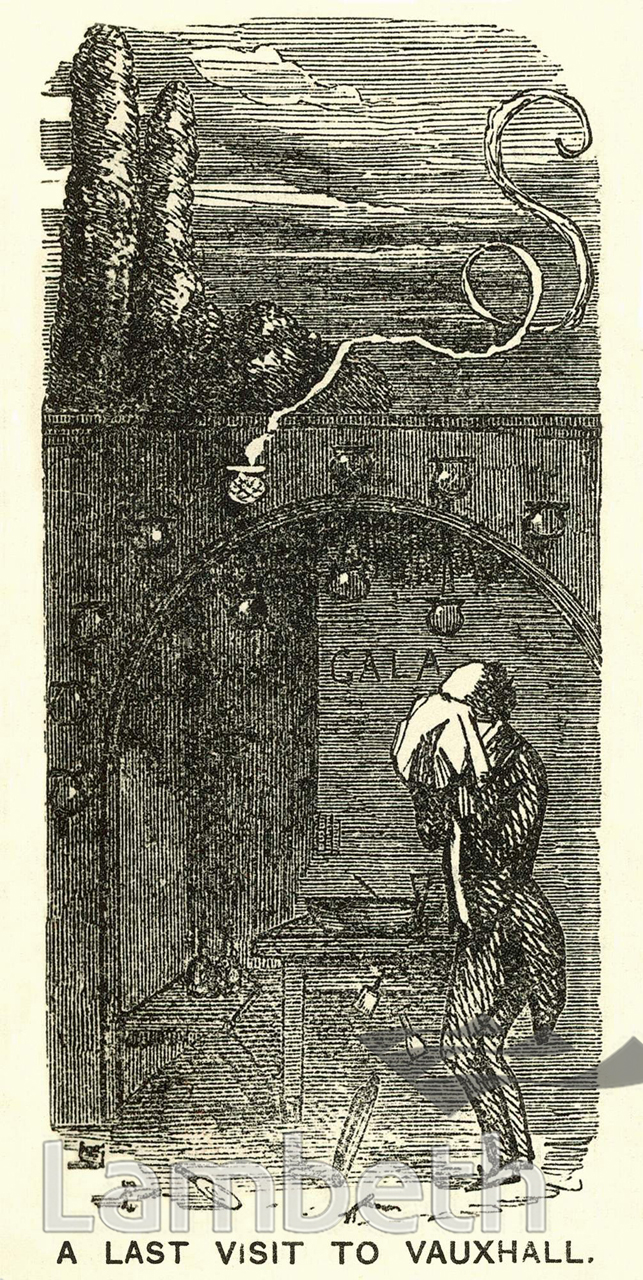 A cartoon to mark the final closure of Vauxhall Gardens: 'I see only the last waiter as he appeared on the last night. The remains of the last sandwich still stick between his teeth. The feel of his last fee is fresh on his fingers. The last ray of the last lamp sadly flickers on his forehead. Feeble as it is he cannot bear the flare of it. He buries his wan face in the recesses of his napkin. Spt! The lamp goes out!'I all helpless have looked on, while the voice of Mr Driver [auctioneer] hath re-echoed 'Going-Gone!' While the fixtures, and the figures, and the fittings, great and small, have been sold in lots six hundred from the Gardens of Vauxhall!'"Lot 51: One deal painted table, with turned legs (one of the original tables made for the Gardens in 1754!). Lot 112. Scenery to Hermitage and Hermit.' Lot 119. An Equestrian picture of the Emperor and Empress of France at a Hunting Party, with costume of Louis XIV, 12 feet square. Three dozen blue dinner plates. Lot 204, A Plaster bust of Scott. A 'ditto Byron,' and 'ditto Tennent', next three lots 'ditto the celebrated M.C., Mr Simpson'. Lot 215 'A Keyboard of Dumb Piano.' Lot 253 Three hat-boxes. Lot 311. A Transparency of H.R.H. P.A. [Prince Albert].'I count two-and-eighty punch-bowls knocked down by the hammer. But who shall count the headaches which had their birth with them. Teetotalism, I fear, was not in feather at Vauxhall. The stock of soda-water glasses ammounteth but to twelve, but of brandy glasses there are more than thirty dozen! Punch Magazine, dated 17th September 1859.
#1850 - 1875  #Engraving  #ENTERTAINMENT  #Punch Magazine  #VAUXHALL
⇐DAVID BOWIE MUR...